You’ve found the place in New Zealand to study all things Shiatsu, whether it be a short course you are after or the full Shiatsu Diploma, you are right here.

Shiatsu is an oriental form of bodywork, which is based on Japanese massage therapy traditions. Shiatsu integrates Chinese medicine theory and Japanese practice with western physiology and anatomy.

Shiatsu was developed in Japan from the techniques of anma, a traditional Japanese massage, which in its origins was practiced by blind people. Shiatsu merges the western knowledge of anatomy with anma, ampuku (Japanese abdominal massage), acupressure, and Do-In (Japanese breathing and stretching practices).
Shiatsu massage, which deals with alleviating various physical and emotional ailments by working on pressure points, is the counterpart to the Chinese method of acupressure.
The Traditional Chinese Medicine (TCM) System is based on the concept of ‘Chi’ or in Japanese ‘Ki’, which is energy that flows through the body along various channels, called meridians.

The word ‘Shiatsu’ comes from the Japanese words ‘shi’, which means finger and ‘atsu’, which means pressure. This pressure is created by the practitioner’s body weight through fingers, thumbs, elbows, forearms, feet and knees in contact with the recipient’s body.

The introductory weekend course is for anyone interested in bodywork, personal growth and development. The course teaches the basic principles and techniques of Shiatsu Bodywork and enables participants to practice and experience what Shiatsu feels like as a giver and receiver. Furthermore, each course has a theoretical focus on a particular Chinese element, depending on the time of year. 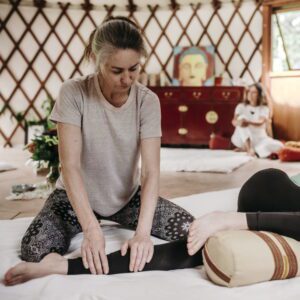 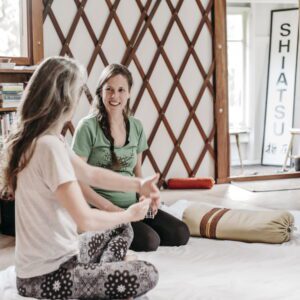 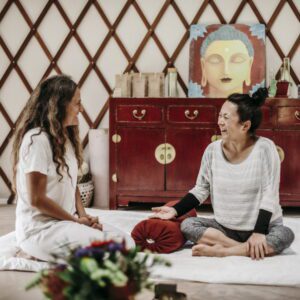 The full Shiatsu Practitioner Training is divided into two parts:

The certificate course will enable participants to use basic Shiatsu techniques on friends and family, for relaxation, wellness and fun. Participants will practice in depth self-shiatsu techniques for own wellbeing and understand the principles of Shiatsu and oriental health as applied in their own life. Bodywork practitioners and therapist can integrate Shiatsu therapy principles into their established modalities.

This certificate (500 hours) makes up the first year of the Diploma in Shiatsu Therapy / Practitioner Level Course and must be completed prior to enrolment in the diploma level.

This two year practitioner level diploma builds on the foundation level certificate of Shiatsu. Participants will learn in depth the philosophies behind Shiatsu treatments, TCM theory and oriental practices. The course covers detailed methodology and techniques for treating a wide range of ailments and diagnoses with Shiatsu, as well as oriental diagnoses and developing treatment plans. Participants are guided in their journey to become professional practitioners as they complete case studies and student clinics, study ethics and business skills, find their own style within shiatsu and work towards making bodywork their livelihood.

Be the first to receive information and updates on new courses

We respect your privacy. Your information is safe and will never be shared.

We respect your privacy. Your information is safe and will never be shared.